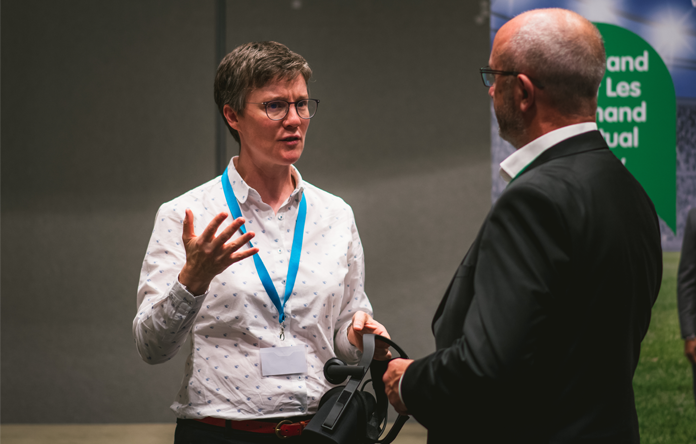 Many people with social and other anxieties find social situations difficult and consequently withdraw from everyday activities. Isolation and lack of activity mean that people often develop physical health problems and their mental health deteriorates. The cost to society is great.

Several small trials conducted by Dan Freeman from the Department of Psychiatry at the University of Oxford explored the efficacy of virtual reality (VR) to help those with phobias such as a fear of heights. The results were extremely positive. Read more in his paper for The Lancet.

At IAPT Connect 19, we were joined by a variety of exhibitors who shared the work they are doing with new technologies to support mental health treatment, including VR.  One of the biggest research projects in this area is currently being undertaken by MindTech, a national centre focusing on the development, adoption and evaluation of new technologies for mental healthcare and dementia.

We were delighted to welcome Jen Martin from MindTech and the team from Oxford VR to IAPT Connect 19 where they exhibited their work and gave delegates the chance to try VR headsets.  Delegates were invited to try a demo of gameChange, a VR treatment which aims to help transform lives by putting powerful automated virtual reality psychological treatment into NHS mental health services.

The project received £4 million in funding 18 months ago from the NIHR Invention for Innovation (i4i) Mental Health Challenge Award to build, integrate and trial the technology in NHS secondary services across the country with people with experience of psychosis. The technology could also be used in IAPT, to support the treatment of individuals who experience social anxiety and other anxiety disorders.

The product currently includes six different virtual reality scenarios, including visiting a cafe, taking a bus journey and visiting a GP surgery. A virtual coach within the programme guides patients through these scenarios, which vary in intensity based on the user’s needs, with patients and their therapists deciding on the level of interaction they have with those around them. In the GP surgery scenario, a patient waits at reception behind someone who gets angry with the surgery staff. By safely experiencing such situations in VR, patients learn that they can cope with them, and that they are not in danger.

gameChange is led by the University of Oxford and Oxford Health NHS Foundation Trust. The award has made it possible to bring together a diverse team of patients, psychologists, psychiatrists, designers, computer scientists, healthcare experts, statisticians, and health economists. The project has the support and involvement of organisations including the McPin Foundation, the Royal College of Art, NIHR MindTech, the University of Oxford spinout company Oxford VR, and NHS mental health trusts across the country who are trialling the treatment and its implementation.

You can find out more on the gameChange website and listen to the interview with Jen Martin, MindTech’s leader of the implementation workstream of gameChange on the The Mental Elf podcast recorded live at IAPT Connect 19.

MindTech also presented a poster at IAPT Connect 19 which explored the clinical effectiveness and cost minimisation model of Alpha-Stim cranial electrotherapy stimulation for generalised anxiety disorder in IAPT services. Find out more on MindTech’s website and download the poster here.

The theme of ‘new frontiers for digital mental health: implementation and impact’ will be explored further at NIHR MindTech’s National Symposium later this week, on Thursday 05 December 2019. Follow #MindTech2019 on Twitter to join the conversation.