It was a pleasure to welcome Ross O’Brien as a speaker at IAPT Connect 19. Ross is the Service Lead and Digital Innovation Director of the Grenfell Health and Wellbeing Service at CNWL NHS Foundation Trust – a service established to support the community affected by the tragic fire at Grenfell tower on 14 June, 2017. He joined us to share his team’s experiences in providing psychological support to the community that experienced this traumatic event, and to describe the role that VR has played and can continue to play in IAPT.

Ross began his talk by describing the days and weeks after the tragedy. There was a lack of centralised information and a great deal of anger around how this could have happened. Survivors were searching for their loved ones in local community centres and hospitals, and the media was filling in the gaps. There was mistrust of the government and its agencies – including the NHS.

The team at the Grenfell Health and Wellbeing Service began reaching out to individuals directly to offer help – going door to door around the hospitals and hotels where people had been moved following the fire. Ross described how, despite these efforts, they struggled to make connections and to help those affected.

Over the next three to six months the team began considering how technology might help them to reach out to the community. They began to experiment with Virtual Reality (VR), taking headsets into the community. Rather than asking people to talk about how they had been affected by Grenfell, they invited them to have a go on a rollercoaster with the headset, or to have a look around the international space station. Through the shared experience of exploring this new technology, barriers between the team and members of the community began to break down and a new dynamic was created – people began to open up about their experiences. Rather than heading off or picking up a leaflet, Ross described how they started to tell the team what had happened, either to them or to a loved one or neighbour. It helped to build trust – to be seen as people rather than just mental health clinicians.

With the IAPT programme, many more women access services than men, and BME and older adult groups are underrepresented in IAPT. The team at the Grenfell Health and Wellbeing Service found that using VR headsets helped them to engage people who traditionally are less likely to access IAPT.

Ross explained that the next logical step for the service was to develop their own VR content, rather than using the apps already available on the headsets. They wanted to create something relevant for the local community that could also be used in a variety of settings and by other services. The service worked with Les Ferdinand, former England football striker, who grew up on the estate and was trusted and admired by the community. Together, they created VR films designed to inspire people to learn more about mindfulness, which supports physical and psychological health. Read more about the films.

The service is now working to build a virtual memorial to enable individuals affected by the Grenfell tragedy to create or contribute their thoughts and memories, away from the politicised environment of the site itself.

Ross referenced the many other opportunities for VR to support mental health treatment including in depression and OCD. One example Ross provided was  the use of VR for children and young people leaving inpatient mental health services, to assist with anxieties about returning home – where a friend or family member could film the journey for the patient to watch, helping them to acclimatise before leaving the hospital. It can be used in the same way for hospital tours, to help patients to prepare themselves for admission for treatment and reduce anxiety. VR could also support patients staying in hospital by offering a way for them to stay connected to their home – enabling a patient to make a virtual visit to their home and see family, helping them to feel less isolated.

Thank you again to Ross for sharing his insights and experiences at IAPT Connect 19.

Don’t miss The Mental Elf podcast interview with Ross, recorded live at IAPT Connect 19. Ross is on Twitter at @rossobr1en. 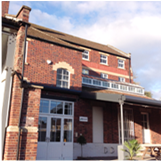 Sign up
for our newsletter and event updates
29 Jun

📣 Announcing the next speakers in our series of webinars for MHSTs

We collaborated with Mayden to develop our new dataset that provides a real time view of data from Improving Access to Psychological Therapies (IAPT) services. 👏

Learn more about about our Mayden iaptus (IAPT) Dataset 👉 https://t.co/f6VDmKv5D5

At the recent @openforumevents CYP conf, we heard from the fab @elht_ELCAS team about how they use #iaptusCYP to support them to manage their MHST (Mental Health Support Team) to record data for 3 core functions.